In many elite Southern homes, punkahs, ceiling-mounted fans manipulated by enslaved workers, were an integral part of the architecture of the dining room in the antebellum United States. Paralleling their relationship to American slavery was their use in British India, where the fans had a long history of being powered by low-caste workers. Pushing past the fans’ decorative and utilitarian qualities, this essay examines the devices’ shifting relationship to slavery and freedom through an examination of their operation within the spaces of elite homes. Both planters and their workers benefited, albeit differently, from their interactions with the fans. Elite planters enjoyed the fans’ cooling breezes, insect-free mealtimes, and the opportunity to display their wealth and refinement. Even though they were consigned to labor at the fans, enslaved workers likely used their proximity to elite whites to learn “genteel” codes of behavior, while gleaning information about the plantation world and beyond. The end of slavery did not mark the end of punkahs; rather, the fans were used to celebrate the “noble” history of the Old South while eliding any reference of slavery. Dana E. Byrd is Assistant Professor of Art History at Bowdoin College.  She is a scholar of American art and material culture. Her research engages with questions of place and the role of objects in everyday life. Her book manuscript, “Reconstructions: The Material Culture of the Plantation, 1861-1877,” examines the experience of the plantation during the Civil War through the end of Reconstruction. She is presently developing a project that examines the nineteenth-century representations of sociable interiors in three cosmopolitan cities: New Orleans, Paris, and London.

This site was produced by David Israel of Bowdoin’s Academic Technology & Consulting Group. 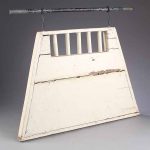